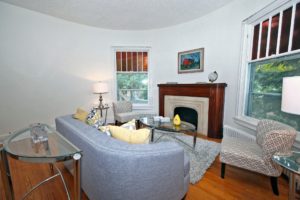 There’s a fireplace on the south wall of the circular living room.

In Toronto there are old houses and there are notable houses, and Esther Dalys happens to live in one of Toronto’s notable old houses.

So much so, it was featured in the 2003 book Old Toronto Houses by Tom Cruickshank. 31 Bedford hails from the High Victorian period (1867-1901), the defining period in terms of the look of old Toronto. “This was the age in which most of our now-familiar downtown neighbourhoods took shape, their straight-as-an-arrow streets lined with trees and red-brick houses,” writes Mr. Cruickshank. But unlike Second Empire or Terrace or even the Romanesque styles imported from overseas Ms. Dalys’ Shingle Style house borrows its form from New England and amplified the rusticism of the lowly wooden shingle. “It could be every bit as grand and self-indulgent as other Victorian fads … Shingle style was the first that was intended not to be so sophisticated, it charmed with primitivism.” 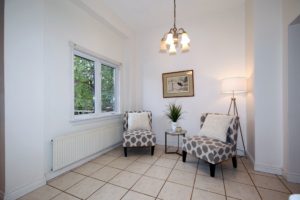 There is a small sitting room on the west side of the house.

31 Bedford Park, known as Mason House, and was featured in sales literature as a model home for the burgeoning Bedford Park village, but Mr. Cruickshank laments its “colossal beehive dome” is hemmed in by the narrow city frontage. “Nevertheless there is something dashing about its lofty silhouette and steeply pitched roof, but imagine the results had the house been blessed with more spacious surroundings,” he writes. By the way, if you’re looking for a walking tour of old Toronto you could do worse than this book as a starting point.

But the dome is what caught Ms. Dalys’s eye in 1998, when she first saw it. “I was living in another house and there had been a tragedy in the family and I was terribly depressed, and I was driving down this street and I saw this house that looked like a castle. And I thought, how can people be unhappy in a castle?” she said. And so, she bought it.

From the street that dome really does dominate the shape of the building. As you climb two short flights of stairs up the terrace it looms like a massive grain silo with a house bolted on to it. The front door is just beside this bulky cylinder leading into an entryway that is currently the landing for the two separated spaces; the door leading to Esther’s floor and the door leading upstairs to the tenanted apartments. 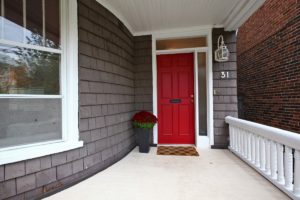 The front door is just beside the bulky cylinder leading into an entryway.

“At the moment I have some people living upstairs. I would imagine anyone buying this would buy it as a family home,” said Ms. Dalys.

The ground floor opens to a central dining room, with doors on each wall. The largest is a pair of double doors opening to the circular living room, 16 feet in diameter, with all white walls and a fireplace on the south wall. There’s hardwood throughout this level, and the ones above. 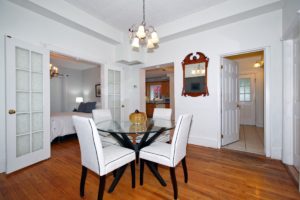 The ground floor opens to a central dining room, with doors on each wall.

A small sitting room on the west side has become Ms. Dalys’s bedroom, and the back of the house has the large kitchen (part of a rear addition) and breakfast area. Next to this is the bathroom with shower, which oddly has a door to the rear yard. The back deck is worn, but looks out onto a 40-foot deep yard with laneway access to park at least two cars. 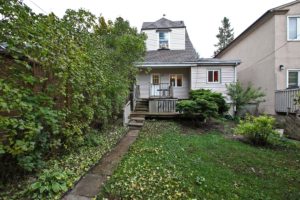 The back deck is worn but looks out onto a 40-foot deep yard.

Upstairs are three more bedrooms, one of which is in the tower, which was formerly an upstairs living room. The house’s second bathroom – with claw foot tub – is at the end of the hall on the front of the house. 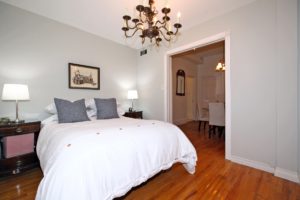 There are three bedrooms upstairs.

The tenant kitchen is in the central space, which has access to a rooftop deck above the downstairs bedroom. The third bedroom sits alone in the attic on the third floor, and there is an access through the closet to the top room in the dome, though Ms. Dalys warns the floor in there may not be weight bearing. She had always dreamed of finishing that space, perhaps even just as a secret room. 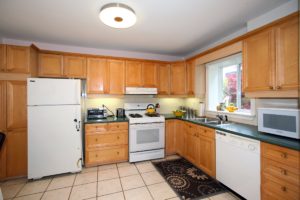 The tenant kitchen is in the central space.

Ms. Dalys is 88 years old, and her children feel its time to move closer to them and into a condo. “There’s a point in life when children decide to take over and become parents,” she said.

“My doctor tells me I’m in perfect health, I keep reminding [my daughter] I had a great grandfather who lived to 101, and I have his genes.”

With travel restrictions in place, wintering in Florida is no longer an option, and Ms. Dalys says she’s ready to skip a winter navigating the Mason House’s many stairs. But she will miss her Shingle Style castle greatly.

“When I first moved in, a lot of the neighbours asked if they could come in to see the house; a lot of people were curious about the interior … I always said no,” she said. Now, for a brief spell, the curious have a chance to see what they’ve been missing. 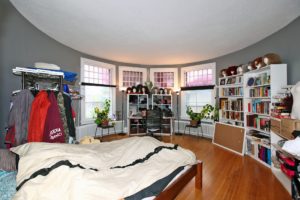