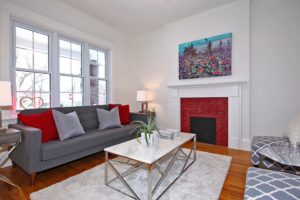 The house has open living and dining areas and hardwood floors.

This semi-detached house was one of many east-end properties with an attractive starting price that found a bevy of suitors in a frantic market. More than 70 potential buyers came for in-person visits and 17 made offers.

“From the outside, it looks like your typical East York semi, but it actually has four bedrooms, which is very unusual, so there were no real good [comparisons],” agent Sandra Pate said.

“But we still had to price carefully because everyone else was $899,000 or $999,000. If we were a million and something, people would say we were too expensive. I’d rather fight for it.” 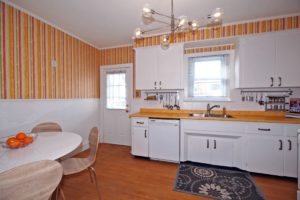 The eat-in kitchen has an exit to a large deck.

The separate eat-in kitchen has an exit to a large deck and mutual driveway. There’s a separate exit from the lower level recreation area which has a second full bathroom.

“It has a very nice, deep and sunny west-facing garden, which is great, and had a nice deck in the backyard,” Ms. Pate said.
“The basement had been dug down by a previous owner, so it had great ceiling height over seven feet.”