Jyske Bank will effectively pay borrowers 0.5% a year to take out a loan 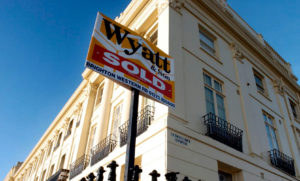 Jyske Bank is the first mortgage lender to offer a negative rate. Some banks are considering moving to negative rates on deposits. Photograph: Alamy

A Danish bank has launched the world’s first negative interest rate mortgage – handing out loans to homeowners where the charge is minus 0.5% a year.

Negative interest rates effectively mean that a bank pays a borrower to take money off their hands, so they pay back less than they have been loaned.

Jyske Bank, Denmark’s third largest, has begun offering borrowers a 10-year deal at -0.5%, while another Danish bank, Nordea, says it will begin offering 20-year fixed-rate deals at 0% and a 30-year mortgage at 0.5%.

Under its negative mortgage, Jyske said borrowers will make a monthly repayment as usual – but the amount still outstanding will be reduced each month by more than the borrower has paid.

“We don’t give you money directly in your hand, but every month your debt is reduced by more than the amount you pay,” said Jyske’s housing economist, Mikkel Høegh.

In recognition of how puzzling the new mortgage is for customers, the bank’s FAQ is littered with questions and statements such as Hvordan kan det lade sig gøre? (How is that possible?) and Ja, du læste rigtigt (Yes, you read that right).

The mortgage is possible because Denmark, as well as Sweden and Switzerland, has seen rates in money markets drop to levels that turn banking upside-down.

Høegh said Jyske Bank is able to go into money markets and borrow from institutional investors at a negative rate, and is simply passing this on to its customers.

But the flipside is that savers will see nothing paid in interest on their deposits – and may also suffer as they go negative.

In Switzerland, the bank UBS last week told its wealthy clients that it would introduce a charge of 0.6% a year if they deposited more than €500,000.

In Denmark, interest rates on savings deposited in Jyske – a Danish equivalent to Halifax or Nationwide in the UK – have already fallen to zero. Now banks in Denmark are thinking of following Switzerland and moving to negative rates on deposits.

“Right now, for deposits we don’t have a negative interest rate. But discussions are ongoing at the very highest level. It’s just that no bank here wants to be the first mover into negative deposit rates,” said Høegh.

While the Bank of England’s base rate is 0.75%, and the European Central Bank’s main rate is zero, in Denmark (which is not in the eurozone) the equivalent rate is -0.4%.

In reality, the Jyske mortgage borrower in Denmark is likely to end up paying back a little more than they borrowed, as there are still fees and charges to pay to compensate the bank for arranging the deal, even when the nominal rate is negative.

In the UK, although the Bank of England has not cut its base rate, the yields on bonds in money markets have, as in the rest of Europe, fallen heavily, with gilts trading at record lows. While no one is predicting negative interest rates on UK mortgages, banks have begun cutting rates on fixed-rate deals.

Barclays this week cut rates on 15 of its mortgages, leapfrogging its rival NatWest to the top of the best-buy tables on five-year deals.

Three years ago, when gilts yields in the UK were last at the levels common today, NatWest warned its business customers that it may have to charge for accepting deposits, although the charge was never actually introduced.